At 3 Porch Farm in North Georgia, Mandy and Steve O'Shea work to be a force for good, one blossom at a time 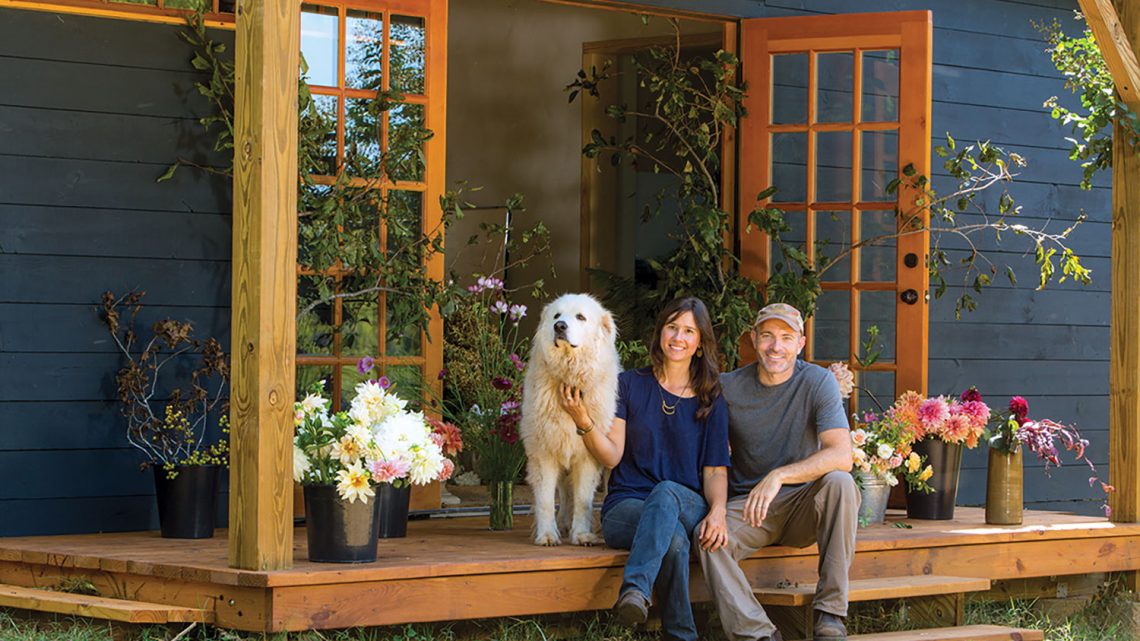 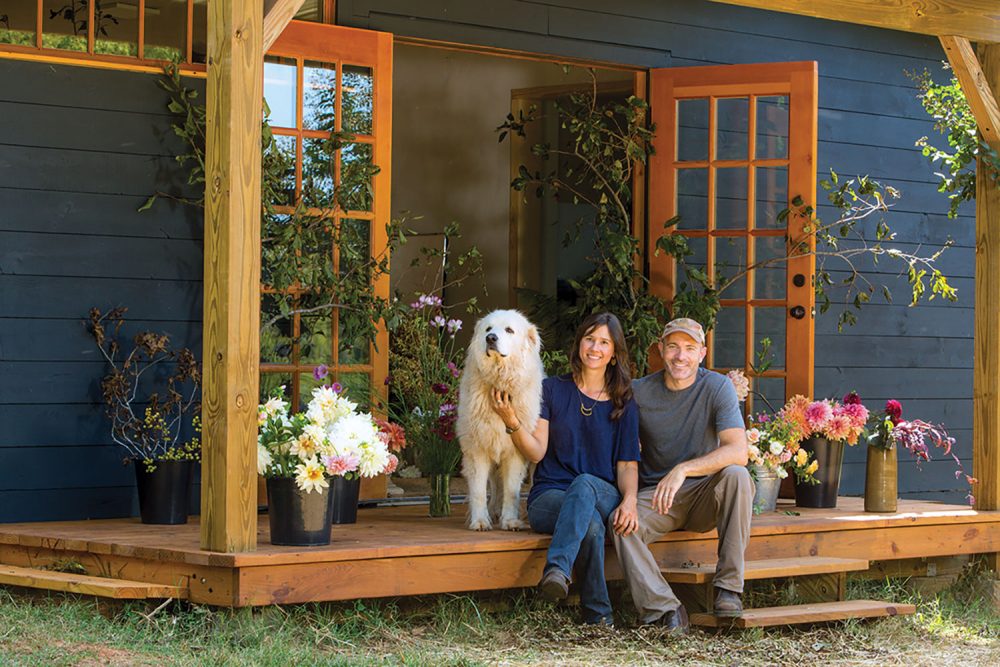 Buckets overflowing with dahlias—bursts of color ranging from palest blush to bronzed peach to deepest plum—attract the first swarm of shoppers to the flower booth. Some of the early-rising farmers market visitors just want a vibrant bouquet for the kitchen table, but there’s also a bride on her way to elope, holding an armful of the dahlia variety known as ‘Café au Lait,’ and an aspiring floral designer who has spied a cache of voluptuous old-fashioned garden roses along with willowy cosmos and a heap of lush trailing vines. Everyone is struck by the sheer abundance. Flowers like these, grown sustainably by Mandy and Steve O’Shea on their North Georgia land known as 3 Porch Farm, aren’t easy to find. 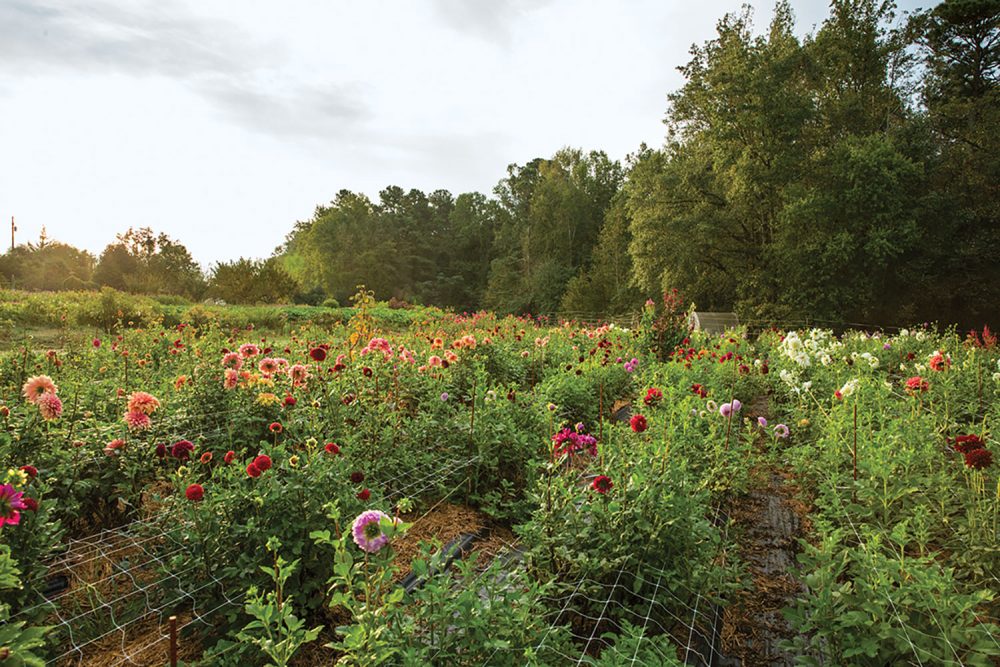 For nearly a decade, the husband-and-wife team have shed blood, sweat, and tears working the land and slowly building a business of their dreams. Two businesses, actually: 3 Porch Farm (named for the original house on their property with a front porch, back porch, and sleeping porch) produces naturally grown flowers and fruit using only solar power and biofueled farm vehicles, and Moonflower, their floral design studio, does weddings, styled shoots, and other special events using seasonal botanicals that the duo grow or forage themselves. 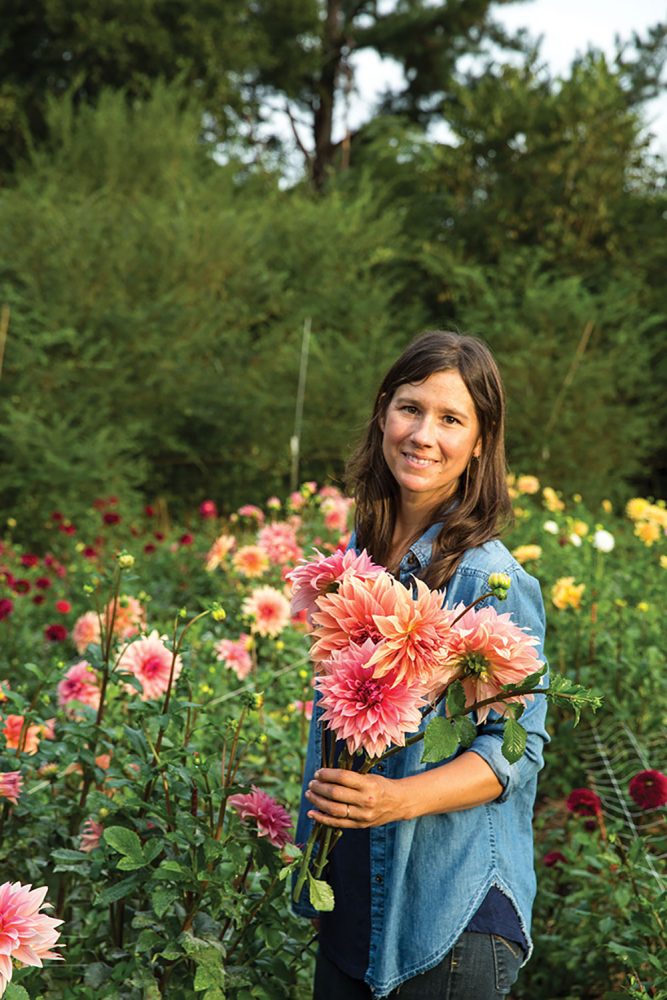 Mandy O’Shea spends most of her days, dawn-to-dusk and beyond, in the fields with flowers in hand. 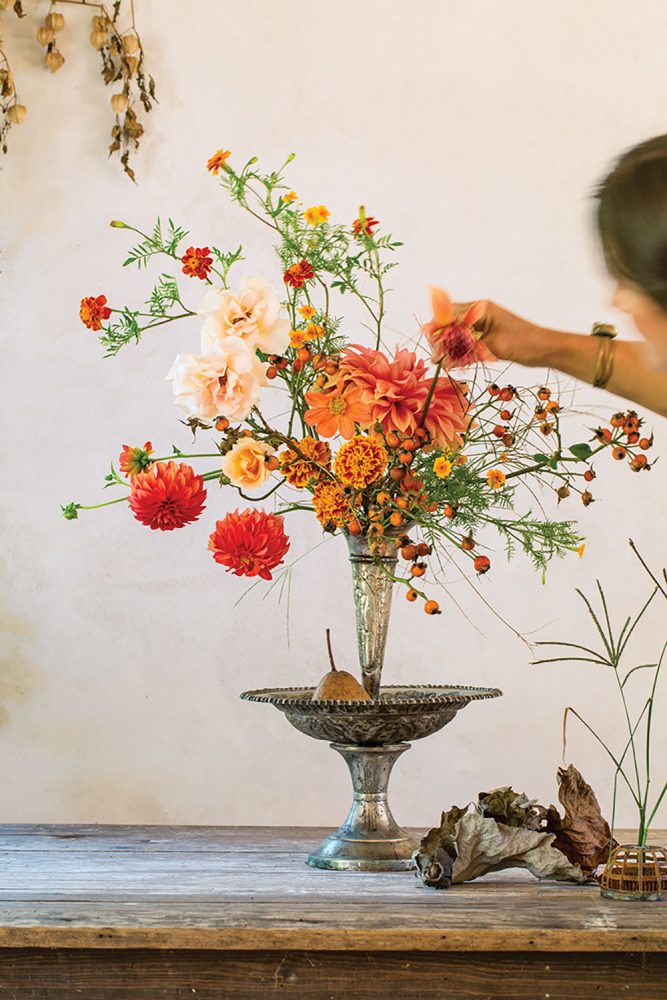 Mandy puts the finishing touches on an arrangement with her signature style, characterized by airiness, long lines, and a sense of movement.

Their organic aesthetic and romantic heirloom blooms have garnered praise from Martha Stewart Weddings and The New York Times, but perhaps more meaningful to the O’Sheas is their loyal fan base, including the folks who seek out their fresh-cut stems and foraged branches each Saturday at one of three markets—Freedom Farmers Market in Atlanta; the Athens Farmers Market, where one might spy artist and designer Susan Hable queuing to buy poppies; and the Marietta Square Farmers Market—as well as event clients and wholesale buyers. 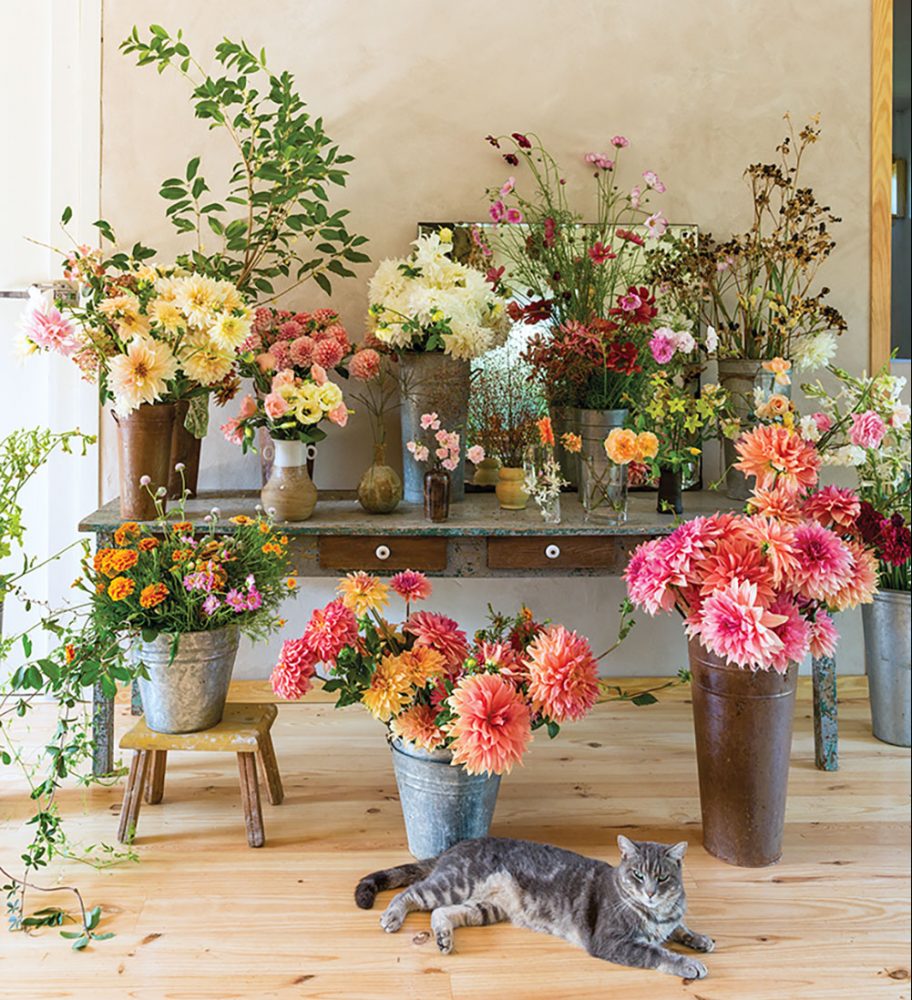 Laden with bounty from their land is a table found at one of Mandy’s favorite community resources, Neat Pieces Antiques.

“We’ve discovered that there isn’t a palette someone isn’t going to love. Bright or muted, all colors find people who love them the most—different strokes for different folks,” says Mandy, who earned her degree in horticulture from the University of Georgia and honed her design skills at the famed McEvoy Ranch in California while developing an eye for uncommon hues. She explains that the bouquets they bring to market are a blend of what they’ve planted in their fields and cuttings from the surrounding woods and landscape. “My taste skews toward the extremes and edges of beauty,” she says. “I love oddities or forgotten varieties and want to try them all, so we’ve always got something new to play with each season.” 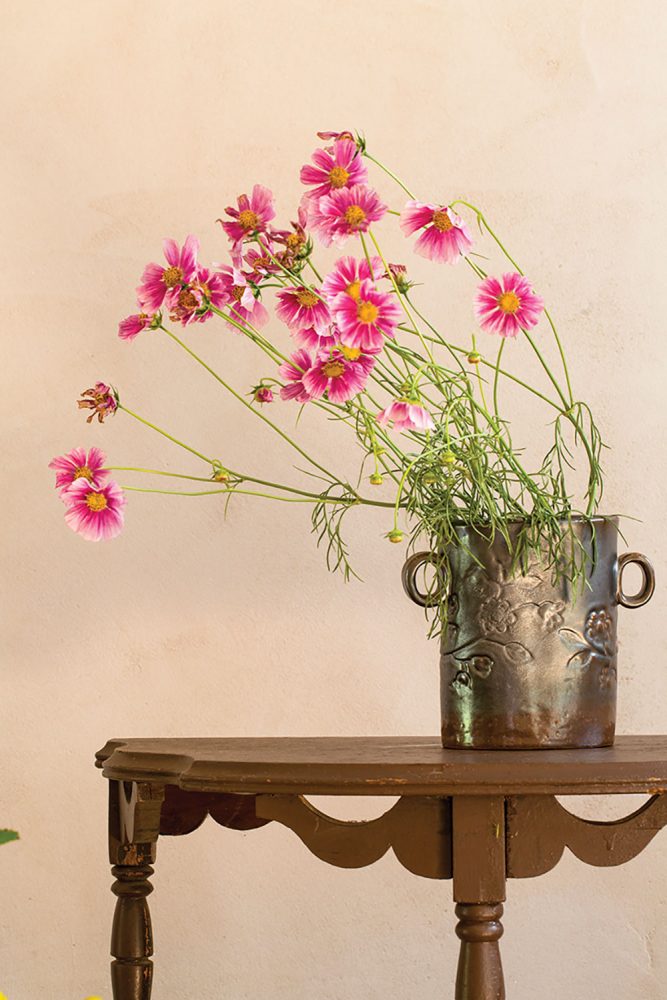 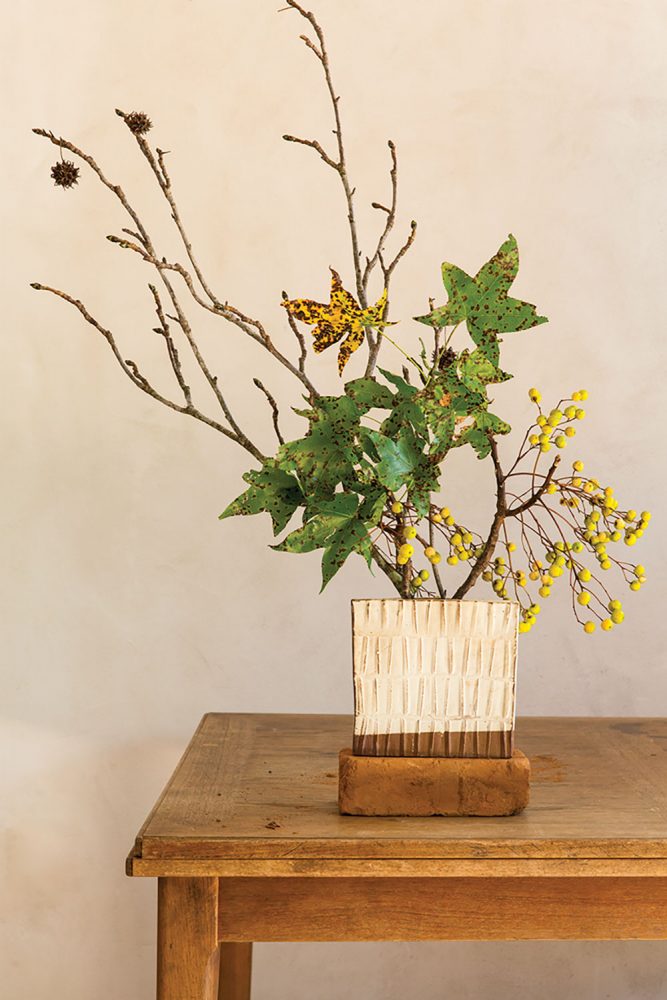 Ceramicist Rebecca Wood has honed her own flower-arranging style with help from Mandy. Vase by Wood.

While familiar flowers like peonies and ranunculus are popular, other blossoms are less known to the public but beloved by Mandy. “One flower that I’ve fallen in love with over the last few years is campanula,” she says. “I rarely see it used, maybe because wholesalers find few growers offering it. I’m thrilled that it is in season during our prime wedding month of May. Cosmos and nicotiana, too. I just can’t get enough of these old-­fashioned flowers.” Some of the plantings are nurtured like infants. Mandy and Steve sometimes wake at intervals during the night to check on them when tempera­tures drop dramatically or a rough storm rages. 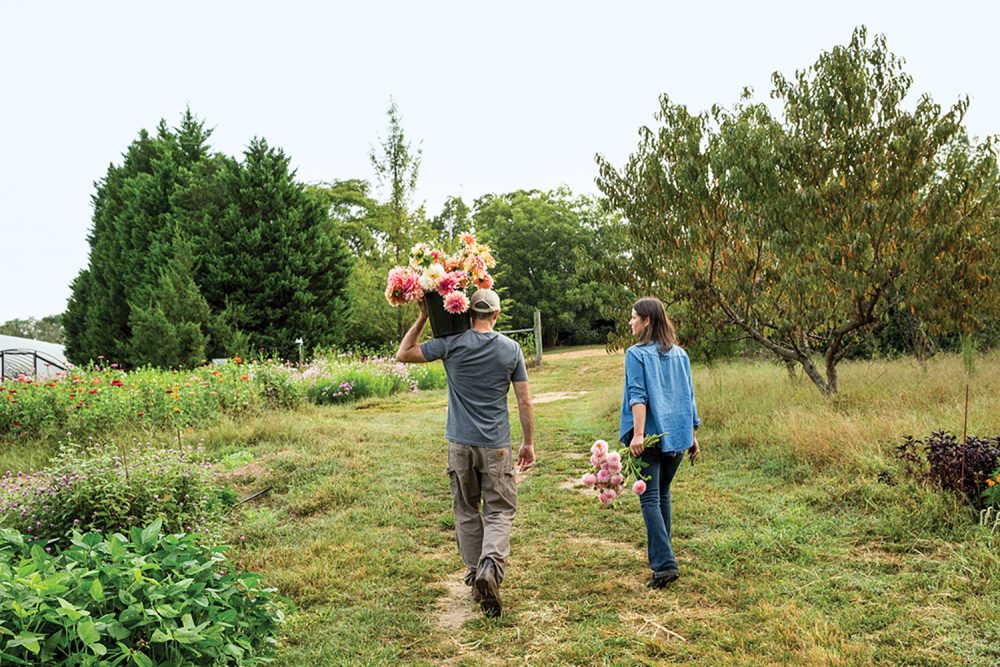 Steve and Amanda hauling dahlias to be prepped for market.

Garden roses, for example, have required exper­imentation. Growing up in the South, Mandy’s early experience with roses was less than ideal. She first perceived them to be high maintenance and hard to grow organically. Then she discovered varieties reclaimed from old Southern homesteads and from the Texas­ based Antique Rose Emporium—purveyor of cultivars developed by English rose breeder David Austin—and her outlook changed. Today the O’Sheas grow about 50 old­style varieties, such as ‘Abraham Darby,’ ‘Graham Thomas,’ ‘Quietness,’ ‘Heritage,’ and ‘Ballerina,’ which thrive on organic care. 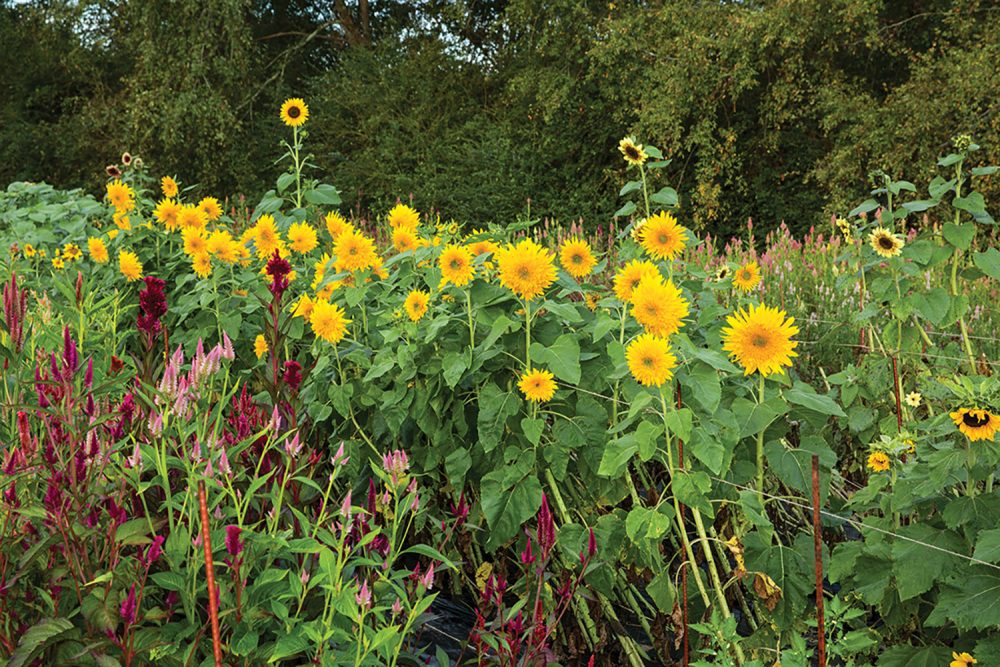 A bed of bright sunflowers

The survivors ultimately make it to the O’Sheas’ new light-filled, solar-­powered design studio, which Steve built by hand. A child of the Northern California suburbs with a background in biology and renewable fuels, Steve modestly says he didn’t pick up a tool until he turned 30. But he wasn’t afraid to get his hands dirty (or calloused). He wanted to, as he puts it, “do something good in this world.” Over time he acquired the skills he now uses spearheading the farm’s construction projects, serving as mechanic, and working in the fields. 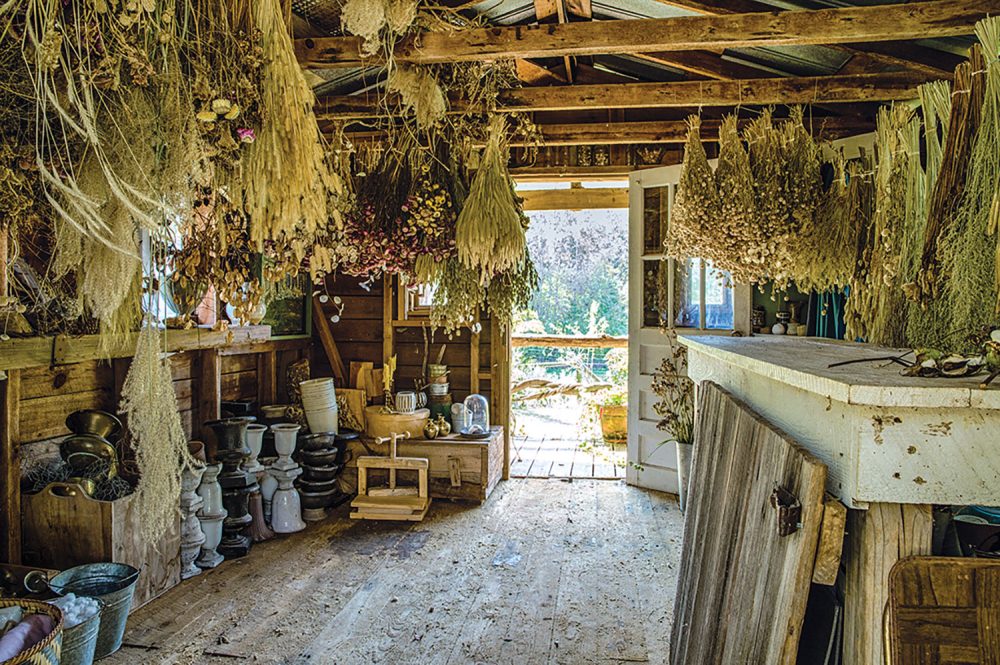 Waste not, want not. Stems hang to dry in the flower shack for eventual use in arrangements or bundles sold at late-fall markets.

In the design studio, a small crew helps assemble market bouquets and Mandy creates her loose, artful arrangements. After years of doing everything mostly alone, with help from Mandy’s parents, the O’Sheas can now provide jobs for others. “Movement and line are the aspects of an arrangement that excite me the most,” she says. “It’s hard to argue with beautiful colors, but the movement of a piece is more personal and evocative. In many ways, it creates the energy of an arrangement and is every bit as important as color selection.”

The flower shack serves as a quiet Sunday retreat after a bustling Saturday.

Subtle shading on a September-blooming dahlia

A mischievous cat dubbed “the biscuit”

In fact, the O’Sheas believe that most clients seek Moonflower’s services because of the studio’s natural, flowing style of composition. “What we bring to an event is the ability to fill a space with the natural elements of that locale’s surroundings,” says Mandy. “Everything is seasonal and relevant, whether it be from our fields or the client’s nearby forest and roadside.”

That said, is there a wedding color palette she wishes more couples would try? “While most designers are tiring of blush-with-neutrals, I’m still a sucker for this palette because it encompasses many of the wild elements we enjoy using—those freshly harvested components that conjure a sense of place.”

More Stories from the Farm(s)