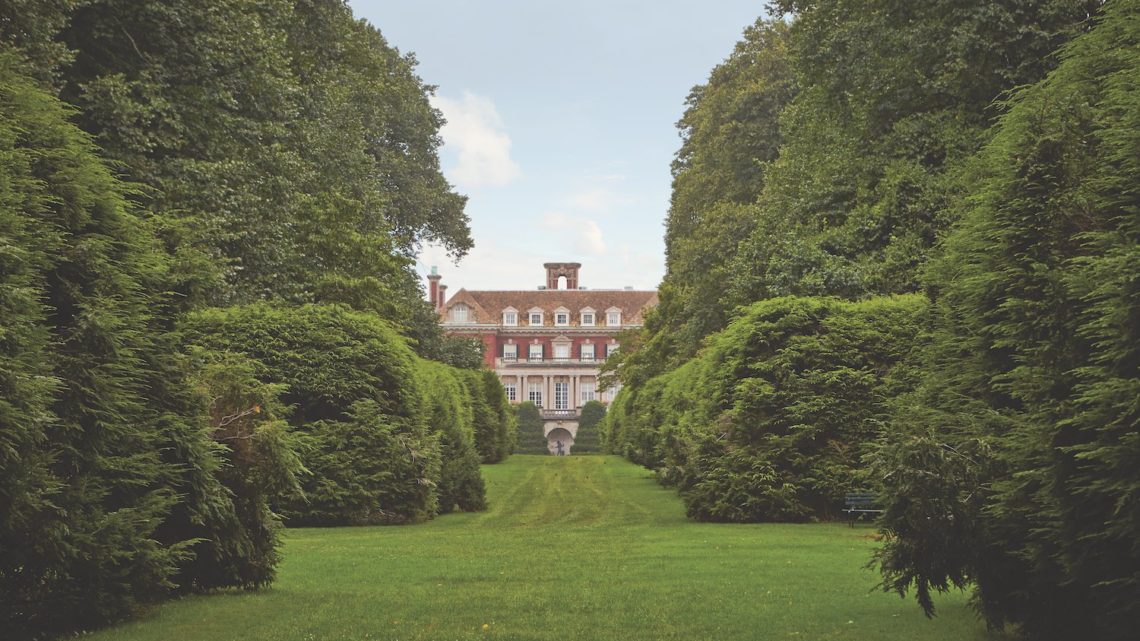 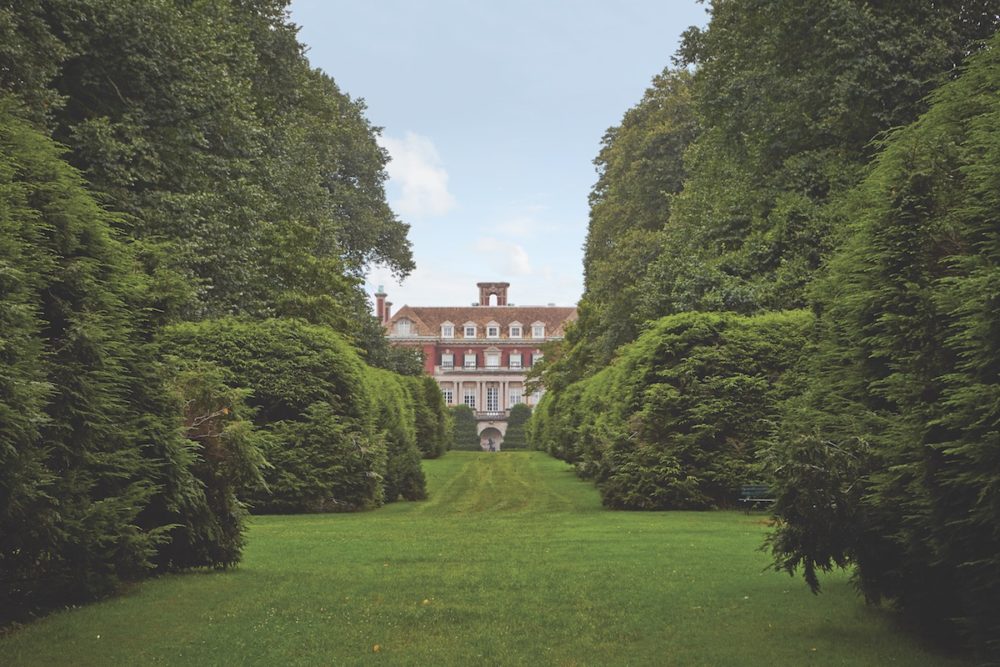 A path lined with hemlocks offers a look at the monumental Charles II–style home built for the Phipps family at the turn of the 20th century. It takes two gardeners two weeks to trim and shape this border annually.

There’s a reason why 25 celebrated movies from Love Story to The Age of Innocence have filmed scenes at Old Westbury Gardens, and it has something to do with the prevailing grandeur. Yes, this public Long Island, New York, estate has heart-stopping, sweeping views. Absolutely, magnificent trees and clipped hedges stretch as far as the eye can see. But Old Westbury Gardens also has intimacy. The park like parcel features naturalistic pools nestled in rhododendrons and rose-bowered alcoves for quiet contemplation. 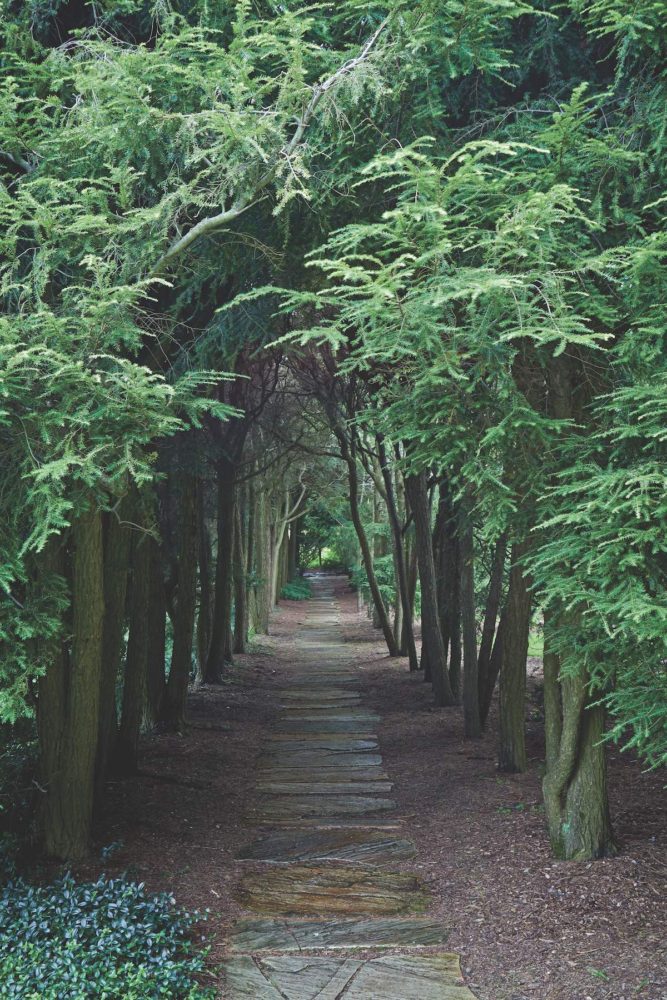 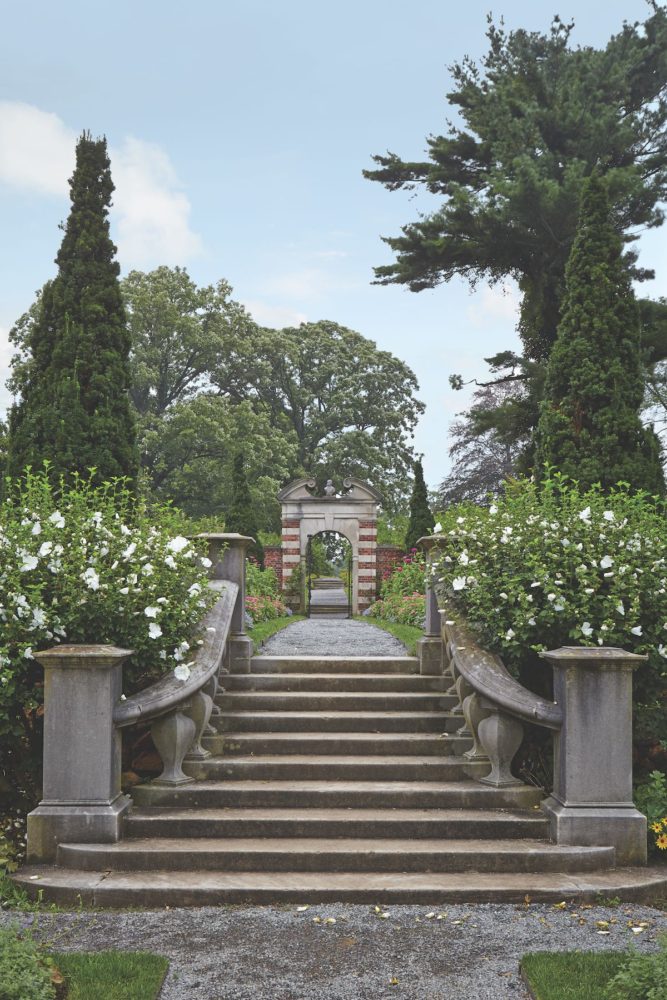 White “Diana” altheas (Rose of Sharon) flank steps up to a path leading to the Walled Garden’s arched gate.

Old Westbury Gardens was the fulfillment of a promise that John (known as Jay) Shafer Phipps made to his wife, Margarita Grace Phipps. Jay was a lawyer and businessman, the grandson of a shoemaker, and the son of Henry Phipps Jr., who landed a job as an office boy to Andrew Carnegie and eventually became his partner at Carnegie Steel Company. Margarita’s family immigrated from Kilkenny, Ireland, to found Grace Shipping Lines. The two heirs met and married in England, but Jay lured his new wife to America with the pledge of a proper British manor. 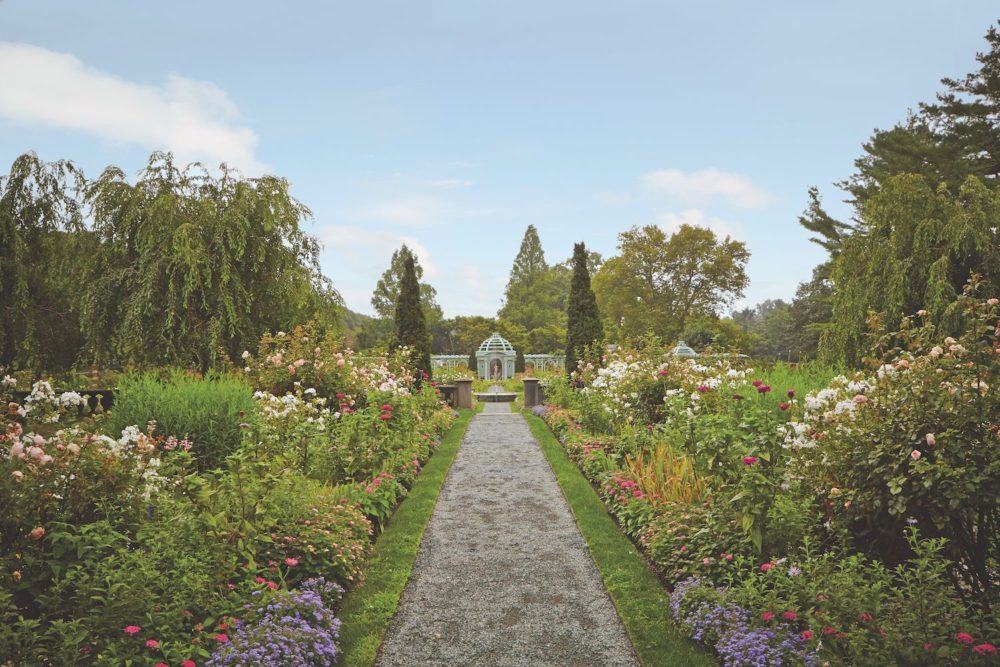 A central path flanked by an abundance of garden flowers showcases the less formal elements that mix with stately landscaping throughout the estate.

Following their 1903 nuptials, the newlyweds went on an extended honeymoon globe-trotting the world. Not long after their return, Jay began work on the promised manor. Three of the couple’s four children were born by 1907 when they moved into the brick mansion designed by architect George Crawley in the Charles II–style that befitted their fortune. No extravagances were spared in the design—the façade of the house is a confection of Ionic columns, gilding, detailed scrollwork, grand terraces, niches with suitable statues, and garnishes galore—all accomplished with absolute taste. 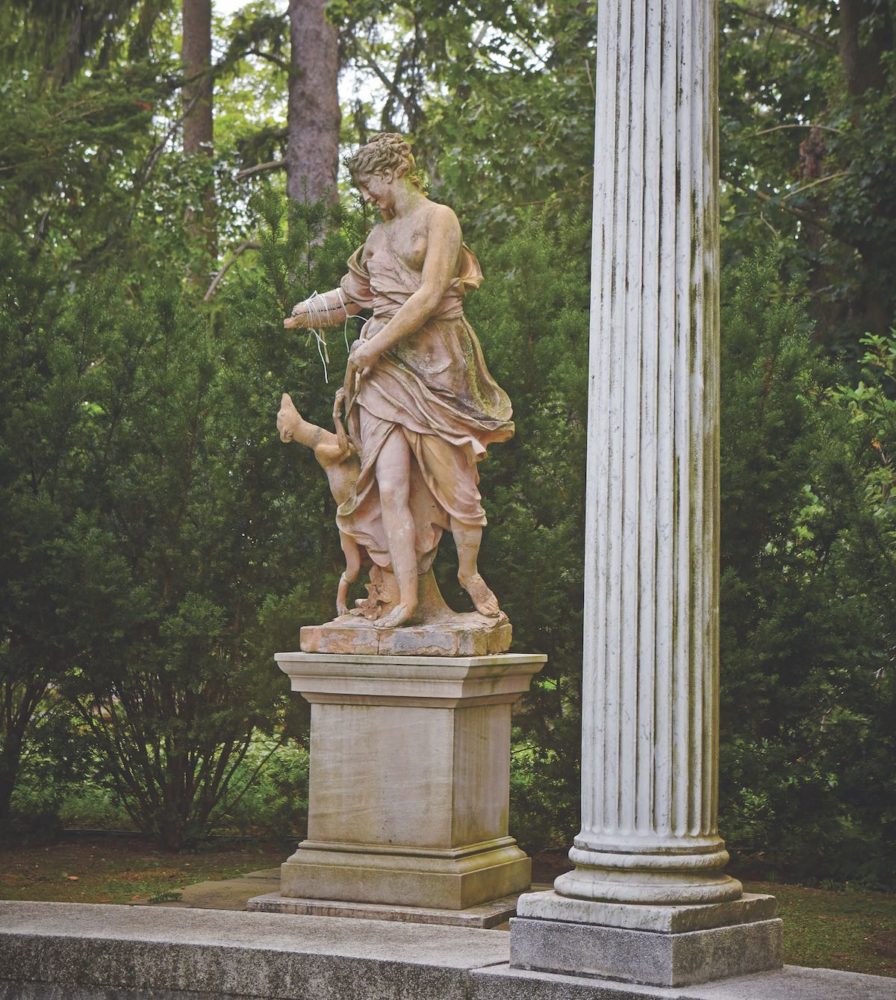 The colonnade features a terra-cotta statue of Diana the Huntress portrayed, as the mythological goddess often is, with her hound.

Meanwhile, the property spread its wings on a vast 200-acre parcel, formerly one of many large Quaker farms that once flourished in the area. The original landscape was designed as a strolling garden in the English country style, with two strong axes running north and south defined by regimental allées of trees and clipped shrubs intersected by cross-axes and destinations tucked in the quadrants. Promenades lead to colonnades and balustrades. Statuary, urns, and finials punctuate every juncture where a meaningful statement might make a stroll more poignant.

But Old Westbury holds other elements that give the estate its one-of-a-kind charm, such as a thatched cottage hemmed by its own lush garden. Shifting back and forth between grand gestures and intimate moments, the property has hidden bridges over serene bodies of water, sphinxes overlooking sweeping views, and Napoleonic archways. Visitors also find a walled garden and a mature rose garden, as well as cloud-like groves of rhododendrons, flowering shrubs, and trees dating back decades. 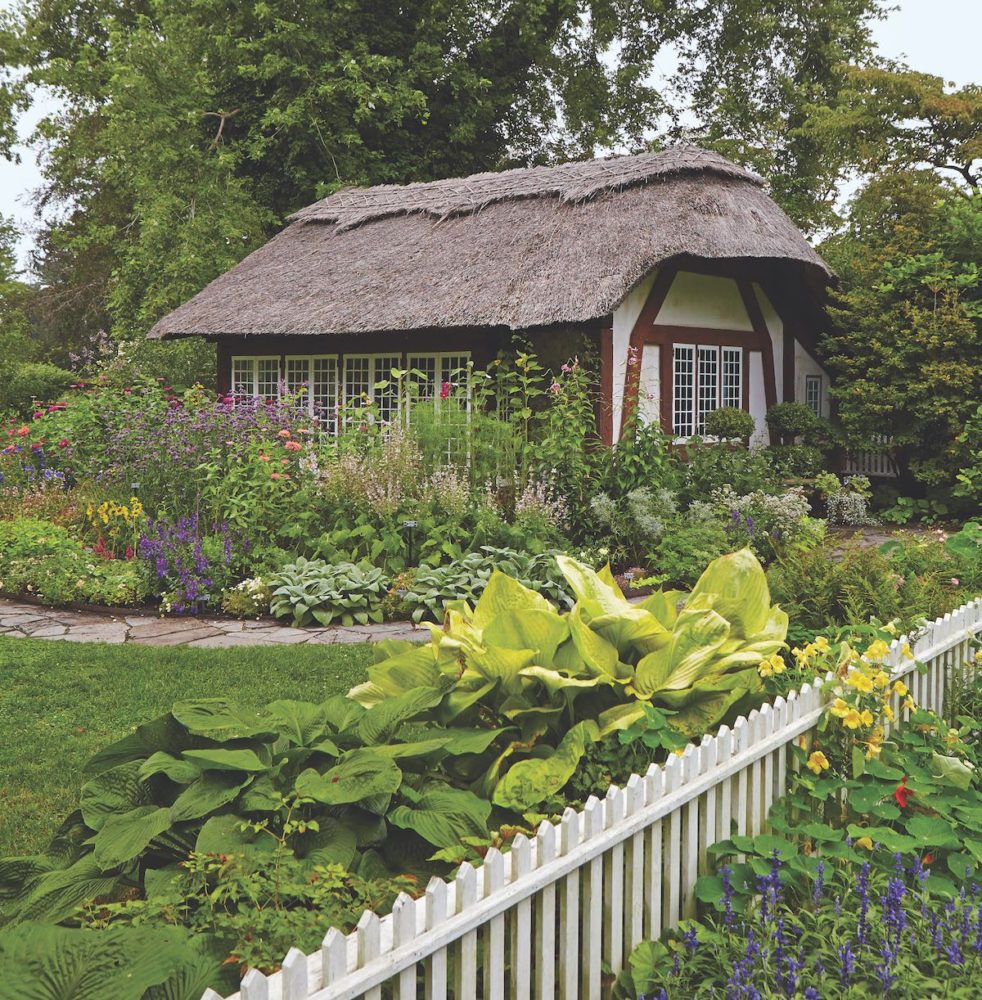 Peggie— daughter of Jay and Margarita Phipps—was gifted this thatched cottage for her 10th birthday.

As the house was one of several the Phipps owned, the gardens were originally planned to flourish when the family was in residence—primarily spring and autumn. When the Phipps’ only daughter, Margaret (known as Peggie) Phipps Boegner, established the garden as a nonprofit charity in 1958 and opened it to the public in 1959, an initiative began to extend the experience into all seasons. That’s when the walled garden gained the voluptuous perennial beds for which Old Westbury Gardens is famed. The beds are thick with delphiniums, hollyhocks, salvias, asters, chrysanthemums, dahlias, lilies, peonies, zinnias, and many other performers shouldering massive David Austin roses. It’s an eyeful every step of the way—stretching for 2½ acres with a lotus pond and fountains, latticework and swags. The garden remains a visual playground for the 65,000 guests who visit each year, transporting each one to the magnificence of the Gilded Age. 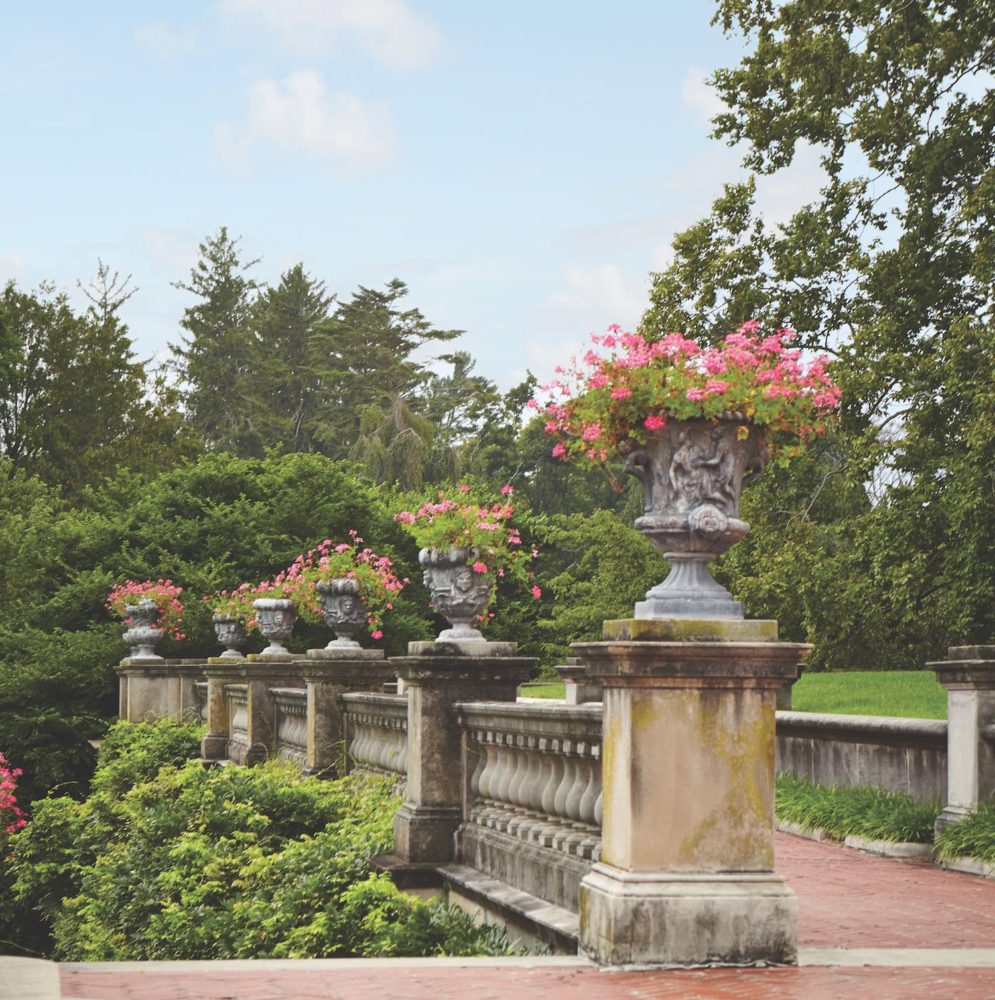 A grand, brick walkway punctuated by a stone banister and columns topped with urns filled with ivy geraniums