Few things bring a garden to life like water. Find inspiration for your yard in more than three dozen of Flower magazine's most popular garden water features, outdoor fountains, and garden pools 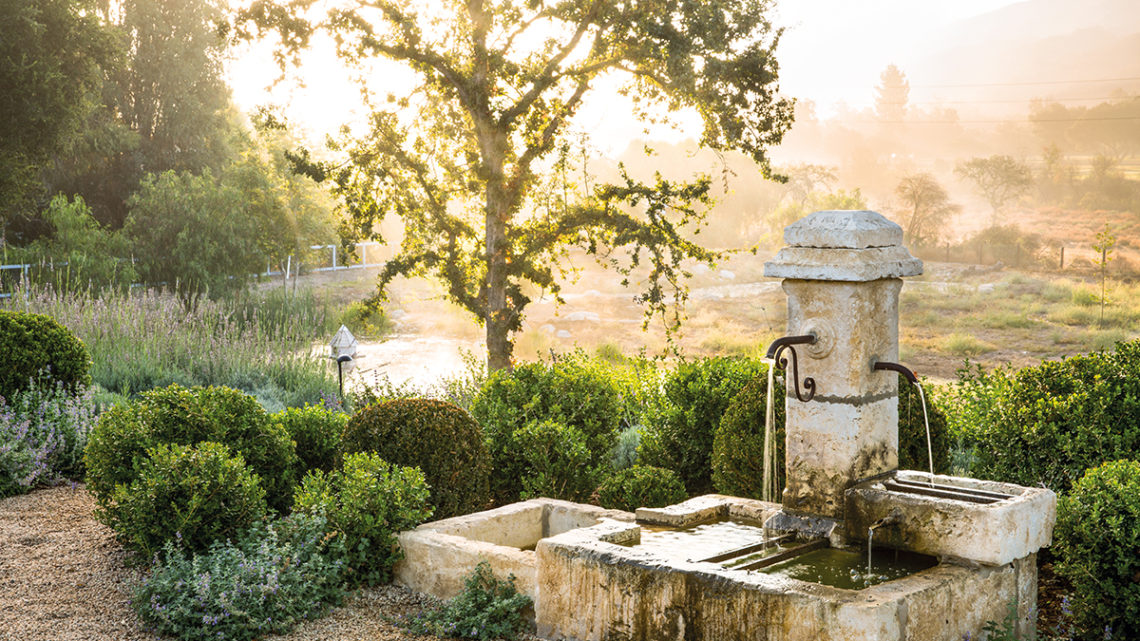 The magic potion in any garden is water. The splash of tiered outdoor fountains—or the gurgle of water over stone—gives the space a voice, while reflecting ponds capture a piece of sky and hold it to the ground. Get inspired by more than three dozen of our most popular garden water features. And for swimming pool inspiration, check out our collection of 15 Gorgeous Pools and Pool Houses.

Edith Wharton's sunken "Italian Garden" at The Mount is planted in greens and whites. It's centerpiece is a simple, stacked stone fountain. Photo by Donna DiMari, Courtesy of the The Mount
More Must-See Estate Gardens

This bougainvillea-laced courtyard fountain at Korakia Pensione in Palm Springs became a wedding focal point when the bride asked her guests to throw lucky pennies into it. Photo by Aaron Delesie
More Wedding Flowers and Celebrations

At Hortulus Farm, the perennial garden borders lead out to the fountain and pool garden, planted in a soft pastel palette of pinks, blues, whites, and grays in the form of Sedum 'Autumn Joy,' Phlox, Lythrum (purple loosestrife), and Fairy rose. Photo by Rob Cardillo
See More of this Garden

An antique French outdoor fountain, surrounded by Australian tree ferns in clay pots, provides a resting spot for one of Furlow Gatewood’s several peacocks. Photo by Rodney Collins, from Julia Reed's book, One Man's Folly: The Exceptional Houses of Furlow Gatewood, Courtesy of Rizzoli
See More of this Garden

In another South Florida garden, limestone slabs create a path over ponds that house the homeowners’ collection of Asagi and Shusui koi. The urns are from Authentic Provence in West Palm Beach. Photo by Nick Sargent
See More Fernando Wong Garden Designs

A wall of ‘Mary Nell’ holly stands tall behind a concrete fountain in the Wakeman family garden. A rich patina gives an aged look to the French reproduction. Photo by Eugenia Uhl

A restored fountain splashes in the Old English Garden. Jo Malone London teamed up with Thrive, A UK charity, to redesign the garden at London's Battersea Park. Photo Courtesy of Jo Malone London

Modeled after English country estates, Filoli's landscape features formal spaces in the Georgian and English Renaissance style such as the Sunken Garden (seen above with the Santa Cruz mountains in the background). Photo by Still Life Photography/Shutterstock.com
More Must-See Estate Gardens

The pool in the this Louisiana garden takes the form of a meandering bayou. A patch of Equisetum (also known as Horsetail) to its left and a flowering Fringe Tree in the background break up the hardscape. Photo by Eugenia Uhl

This pool is framed with Tennessee Crab Orchard stone and Charleston Old Carolina Brick, one of Ben Page’s favorite material combinations. The 19th-century gargoyle, he says, “has just as much personality as this project’s fabulous owner.” Photo by John Chiasson
See More Ben Paige Gardens

Fountain jets with view of the Spanish Court garden and house at Longue Vue were designed for Edgar and Edith Stern by Ellen Biddle Shipman, known as “the dean of American women landscape architects.” Photo courtesy of Longue Vue House and Gardens.
More Must-See Estate Gardens

Castor and Pollux were re-cast in bronze from an original bronze rescued from an undisclosed City of London building. Charles Nevinson of Architectural Accents turned the piece into an outdoor fountain for this Sea Island, Georgia garden. Photo by Julia Lynn
See More from this Garden

A central fountain and oval reflecting pool bordered with boxed pear trees, echo the residence’s French demeanor in the winter garden at Parterre. Photo by Mick Hales
See More of this Newport Garden

Birds take in the views from a tiered fountain in the parterre garden at Newton Vineyard. Photo by Eric Wolfinger
See More of this Garden

The statue in the pond is similar to a design created by Clarisse Grima in the early 1900s. Both are located in a “secret garden” tucked far away from the hustle and bustle of St. Charles Avenue in New Orleans. Photo by Eugenia Uhl

At the home of designer Jennifer Amodei, a pair of charming stone buildings serves as changing cabanas for the pool area, set off by an olive tree and a pretty French-inspired fountain. Photo by Todd Tyler
See More Designs from Amodei

Sculptural branches of a live oak frame a fig ivy–coated wall and stone water feature in this lush, Sea Island garden. Photo by Julia Lynn
See More from this Garden

Landscape architect Jeffrey Carbo likes to incorporate moving water into projects so that you can hear it trickling or gushing. Here, he incorporates a splashing spill into a rain garden. Photo Courtesy of Jeffrey Carbo
See More of Carbo's Designs

P. Allen Smith chose a circular layout for this fountain and “room” of the Terrace Garden, which overlooks the Arkansas River. Photo by Nancy Nolan
See More of Moss Mountain Farm

A hedge opening in the Walled Garden at England's Scampston Hall offers a view of the fountain. The Walled Garden was designed by Dutch garden designer Piet Oudolf, who was catapulted into fame after his radical installation of the High Line park in Manhattan.
More Gardens of Yorkshire

In the lovely Nantucket garden of Bill and Laura Buck, the koi pond is a charming water feature. Photo by Kindra Clineff
More of the Buck's Nantucket Garden

The famous Cascade at Chatsworth estate in Derbyshire, England, was first created in the 1690s. The water feature took on its present wider and longer form in 1708, when Cascade House, designed by Thomas Archer, dominated the scene. Photo courtesy of Chatsworth House
See More Derbyshire Delights

At the Butler House garden in the town of Kilkenny, Ireland, a low hedge of Sophora japonica and cryptic stone blocks, which serve as seats, ring a circular pool. The stone seating blocks are remnants of an IRA-bombed Dublin monument to England’s Admiral Horatio Nelson. Garden paths radiate from the pool like spokes. Photo by Hugo Shackleton
See More Arthur Shackleton Garden Designs