Christmas flowers including paperwhites, amaryllis, and poinsettias shine amidst elegant interiors to celebrate the holiday season. 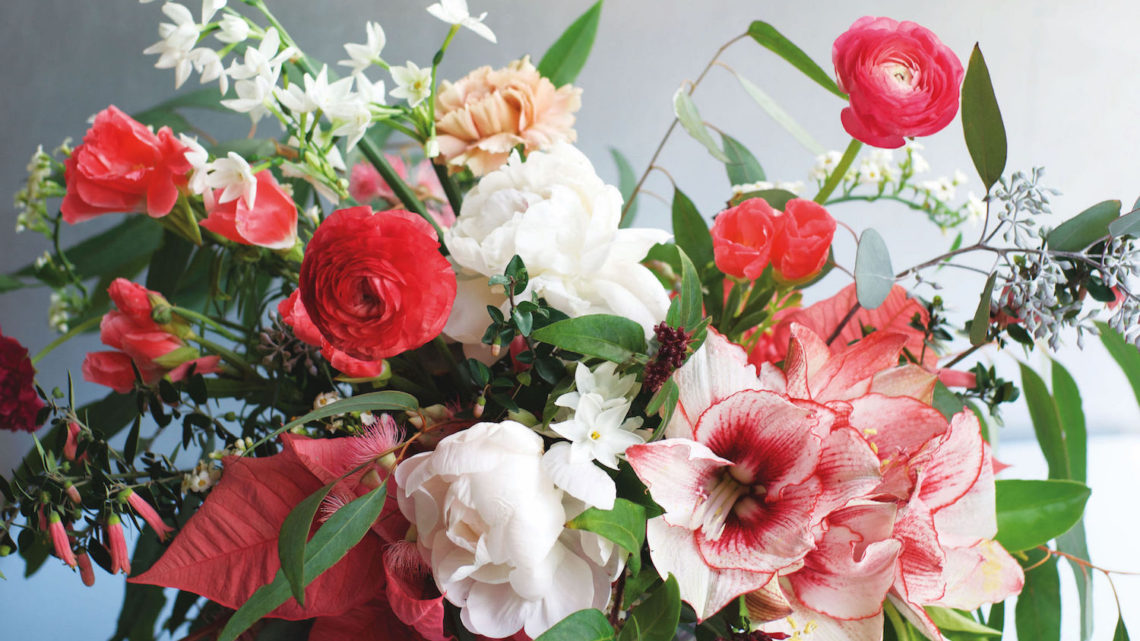 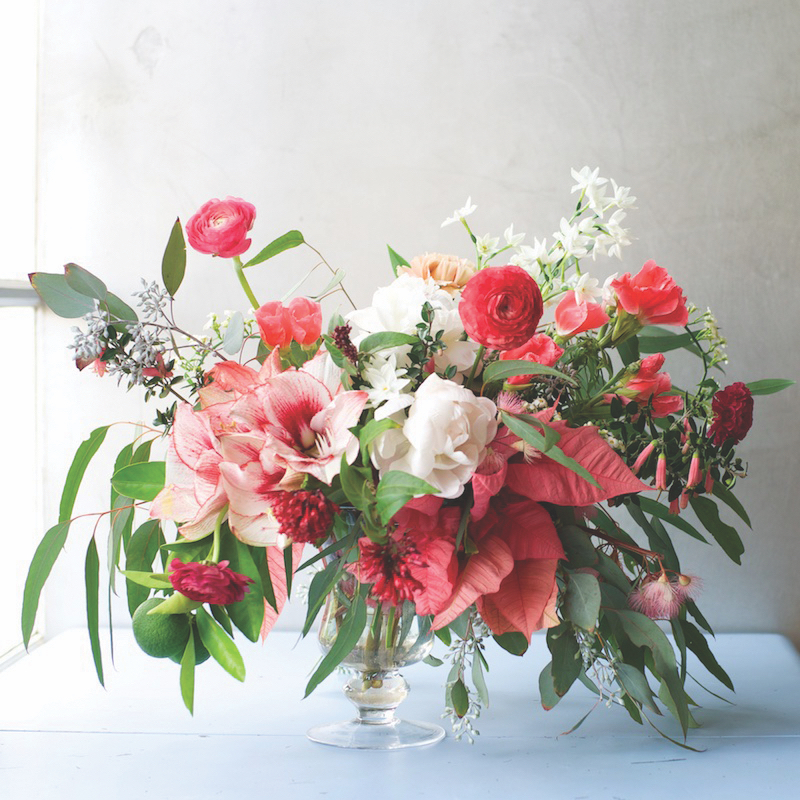 Poinsettia, paperwhites, and amaryllis bring Christmas cheer to a lovely crowd of blooms and greenery in a masterful mix by Kiana Underwood of Tulipina. Photo by Nate Underwood

IT’S THE DAY AFTER THANKSGIVING AND THE FAMILIAR, heartwarming sights return and continue until Christmas Eve. Evergreen trees of varying sizes are strapped to station wagons and compact cars, SUVs, and minivans. We pull out ornaments, tree lights, candles, and special china. We polish our silver and hang wreaths with beautiful bows on our front doors. The party circuit begins.

But it wouldn’t quite be the holidays without the Christmas flowers—the poinsettia, amaryllis, and paperwhite arrangements that round out the seasonal color palette. A happy part of the Christmas ritual since the 19th century, these flowers forge a strong foothold in traditional celebrations every year. In most parts of the country, these flowers do not bloom outside in winter. Poinsettias like warmth, so as long as they have a sunny spot to perch inside, they bloom proudly through December. Amaryllis and paperwhites are actually spring flowers that bloom when forced with the help of sunlight and water just in time for Christmas. All meaningful, they are stalwart decorations that have come to symbolize the season. 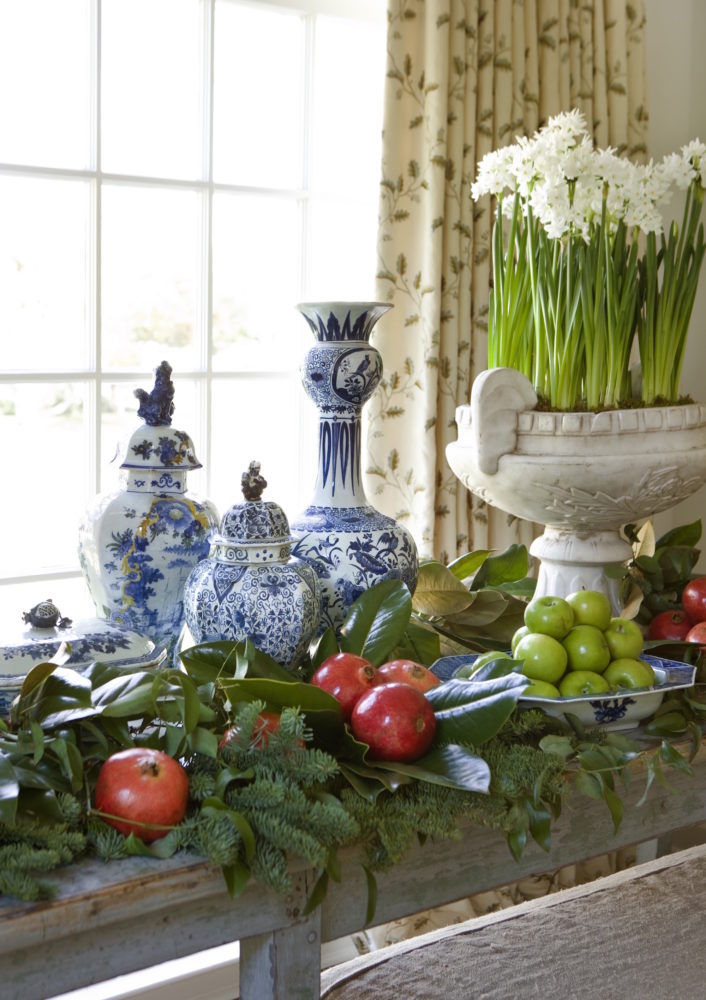 Work commissioned by Southern Accents Magazine | In contrast to bringing in reds and greens at Christmas, Dallas designer Lisa Luby Ryan pulls out elements from her clients’ interiors. “I love white no matter the time of year,” says Ryan. “So paperwhites make sense—watching them grow adds to the anticipation; massing them is the only way to do it; and perfuming the whole house makes it transformative.” Photo by Erica George Dines

WITH ALL THE RED, GREEN, AND GLITTER THAT PROLIFERATES IN December, it’s a happy complement to see clusters of paperwhites on tabletops and sideboards. Attribute their appeal to the element of freshness and elegance they bring without a lot of fuss. But perhaps best of all is their fragrance—a heady, distinct perfume that gives our homes a special scent, which comes once a year.

Paperwhites are a part of the narcissus family, but are a more modest and smaller flower than their showier cousin, the daffodil. The narcissus symbolizes rebirth and renewal because it’s one of the earliest bulbs to sprout, signaling the arrival of spring. Paperwhites can bloom even earlier because they are remarkably easy to grow or “force” indoors. The origin of the flower’s name is linked to several Greco-Roman myths, including the one about a man named Narcissus who was so proud of his beauty that he was unable to pull himself away from his own reflection in a pool. Narcissus drowned in it, and the gods turned him into a flower so that he would never have to leave his spot or his reflection.

Flower Tip: How to Force Paperwhites 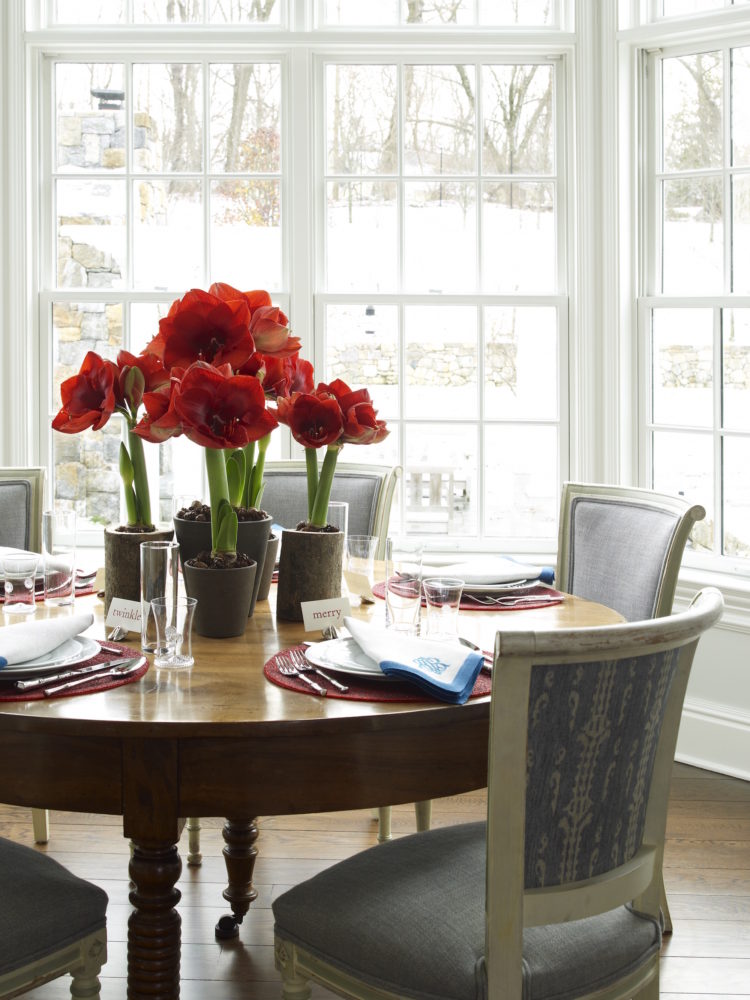 Tria Giovan Photography | Connecticut designer Carmiña Roth gravitates toward amaryllis during the holidays. “The red amaryllis is one of my favorite choices when decorating for the Christmas season,” she says. Photo by Tria Giovan

THE PASSION FOR THE HOLIDAY, WITH ITS consuming immersion in color, festivity, and pomp captivates all of us and is well represented in the amaryllis with its big, exuberant blooms and hearty stems. It is also celebrated for its long-lasting flowers (the plant also dependably reblooms) and for its versatility in arrangements. Not a flower to stand alone, the amaryllis makes a statement when huddled together with its sisters in a series along a mantel, perhaps, or when massed in one pot. Amaryllis stems can also appear beautifully when cut short and mixed with other flowers for the table.

These Christmas flowers, however, have a beautiful and tragic history. Named for a nymph in Virgil’s Eclogues who fell in love with an indifferent shepherd named Alteo, Amaryllis consulted the Oracle at Delphi for guidance with her unrequited love. The Oracle suggested a dramatic solution—to pierce her heart with a golden arrow. So, she continued to pierce her own heart for thirty days. Once she died, the blood that dropped became a blood-red flower, which was then called Amaryllis. Though versions of the myth vary—did she die or not—the significance of the word ‘amaryllis’ reflects the story. Suggesting pride, determination, and beauty, the word literally means to sparkle, making it a fitting symbol of the season. 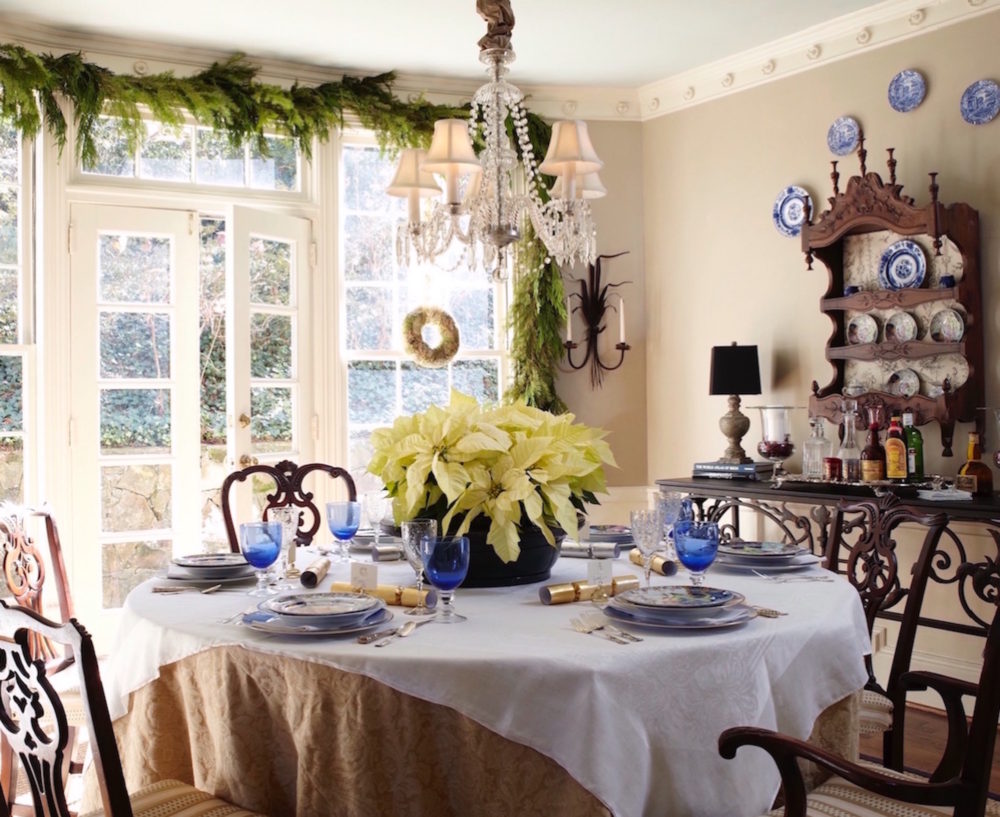 Massing poinsettia plants in a sizable container makes for an easy centerpiece that still feels elegant, especially when joined by a swag of greenery and blue-and-white china. Photo by Jean Allsopp

BETWEEN THE DEEP, SATURATED, TRADITIONAL red and burgundy or the more subtle shades of white and pink, the poinsettia’s bracts or modified leaves with their wide-open faces virtually announce their relevance in the panoply of Christmas flowers. Masses of the plants arrive at the grocery store or nursery with their plastic pots swathed in metallic foil. That predictable, metal-foil presentation gives the poinsettia a less-than-refined reputation. However, floral designers in all their brilliance bring out the best in poinsettias, trimming the stems, cauterizing them with a flame, and then building lush arrangements to celebrate their liveliness and innate beauty.

Originating in Mexico, the ancient Aztecs used the plants to extract dye, and the sap to treat illness. Its popular name is for Joel Roberts Poinsett, a botanist and physician who was the first U.S. Ambassador to Mexico. He fell in love with their red hue in 1828 and had the plants sent back to his greenhouses in Greenville, South Carolina.

We can attribute the poinsettia’s holiday popularity to the fact that it tends to bloom in December in its native Mexico. A folkloric tale tells the story of a young girl named Pepita who wanted to give a gift to baby Jesus. She had no money, so she picked a bouquet of weeds. Her cousin Pedro told her that even though they were a small gift, the fact that they were offered with love meant everything. When Pepita laid the bouquet at the cradle of Jesus, the humble gift became a bouquet of lush, beautiful flowers—a manifestation of her devotion.

“I absolutely love the different shades of poinsettia that are available this time of year —such beautiful shades of pink, peach, and cream—in addition to all of the lovely reds.” –Kiana Underwood 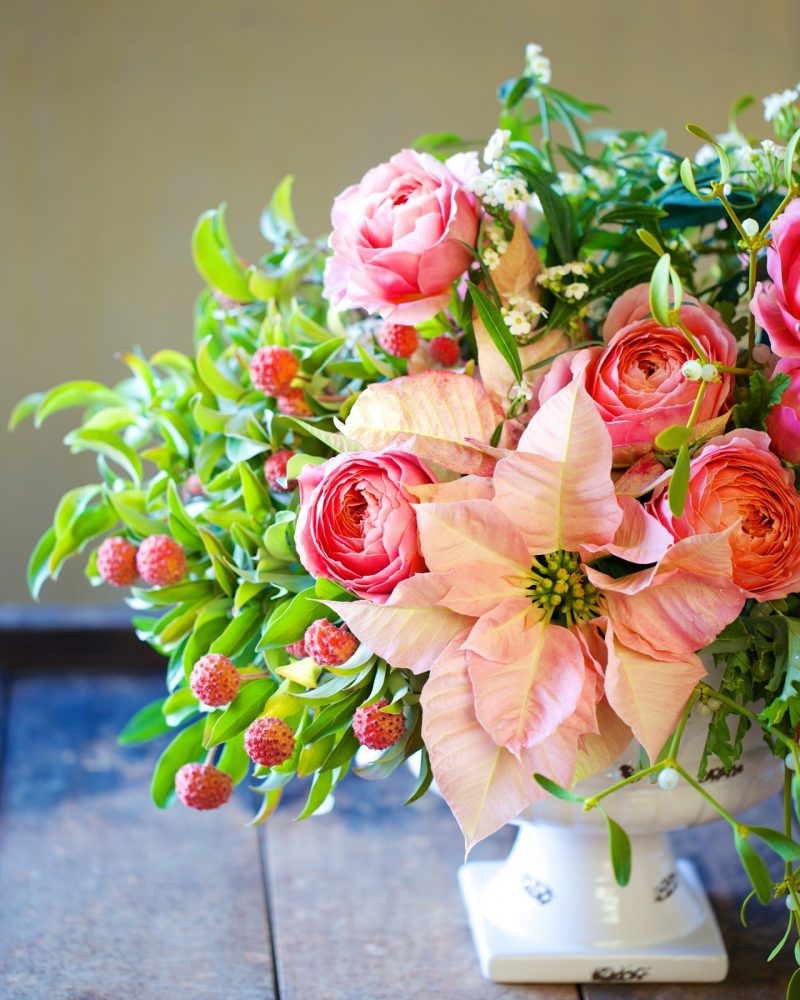 This grouping in shades of pink and coral that includes David Austin roses, dogwood fruit, euphorbia, and mistletoe by floral designer Kiana Underwood of Tulipina, elevates the poinsettia to a sophisticated status. Photo by Nate Underwood

Next post Fields of Dreams at Three Porch Farm