In the backyard of the largest cut-flower-producing region in Colombia, an annual festival blends culture and color in an explosion of fresh blooms

Riding Medellín’s aboveground metro on an uncharacteristically gray morning in July, all passengers fixed their eyes in the same direction. At the far end of the car, oblivious to the stares, a girl in an airy white dress held her mother’s hand. On the girl’s back, a huge disc of flowers swayed with the motion of the train. The disc looked like the plumage of some rare bird. Arranged in concentric circles, ‘Staccato’ carnations, purple Peruvian lilies, and bright goldenrod transformed the flat light through the train’s windows into perfect color. Upon pulling into the next station—named, appropriately, Floresta—the mother and daughter made their way to the door. Had the little girl turned at that moment, she would have seen a train car full of smiles.

Antioquia, the area in northwest Colombia that counts Medellín as its capital, is one of the largest cut-flower-producing regions in the world. With ample sun, year-round spring temperatures, and regular rain, the climate in this mountain region ideally suits an incredible variety of blooms. Seventy percent of cut flowers imported to the U.S. come from Colombia’s prolific flower industry.

Every year in late July and early August, the streets and parks of Medellín erupt in a multi-day celebration of flowers. With events like a city-crossing convoy of festively decorated chiva buses, a procession of close to 7,000 horses, and a children’s parade, the Feria de las Flores presents a showcase of Medellín, a city of resilience, hospitality, and charm.

Santa Elena and the Festival of the Flowers

An important part of Antioquia’s culture for more than 50 years, the festival traces its beginnings to Santa Elena, a small mountain town 45 minutes east of Medellín. The sunbathed fields surrounding Santa Elena make up the traditional home of Antioquia’s flower industry. Flower vendors in the area, known as silleteros—a name derived from the wooden seats (silletas) that were used to manually transport people in a distant colonial past— have long been renowned for their artistry and for the quality and variety of their flowers. In 1957, the silleteros of Santa Elena received an invitation from a member of Medellín’s tourist bureau to display their wares in the city. About 40 silleteros made the trip that year and locals received them with such exuberance that the display became an annual event.

Santa Elena remains the staging area for the Feria de las Flores. In the honey-colored days leading up to the festival, silleteros arrange millions of buds onto three types of silletas. The more traditional silletas—a bit smaller than the body of a wheelbarrow—are worn on the back and closely resemble the wooden seats used for human transport generations ago. An inset wooden grid in the silleta holds flowers at a 45-degree angle. Before motorized transport, people carried flowers door-to-door to Medellín residents on silletas.

The larger silletas emblemáticas (emblematic silletas) add a sturdy base to the traditional design. The result is a floral diorama in which vivid scenes and written messages are designed from contrasting blooms and flexible pine buds. The silletas monumentales (monumental silletas)—the largest class of silletas—are gargantuan interpretations of either of the two designs. Carrying these arrangements that reach 170 pounds, the silleteros are often older men and women, revered in the Paisa (farming) culture and honored by adoring parade-goers. The tradition of the silletas monumentales is a family affair and is passed down with pride through generations. 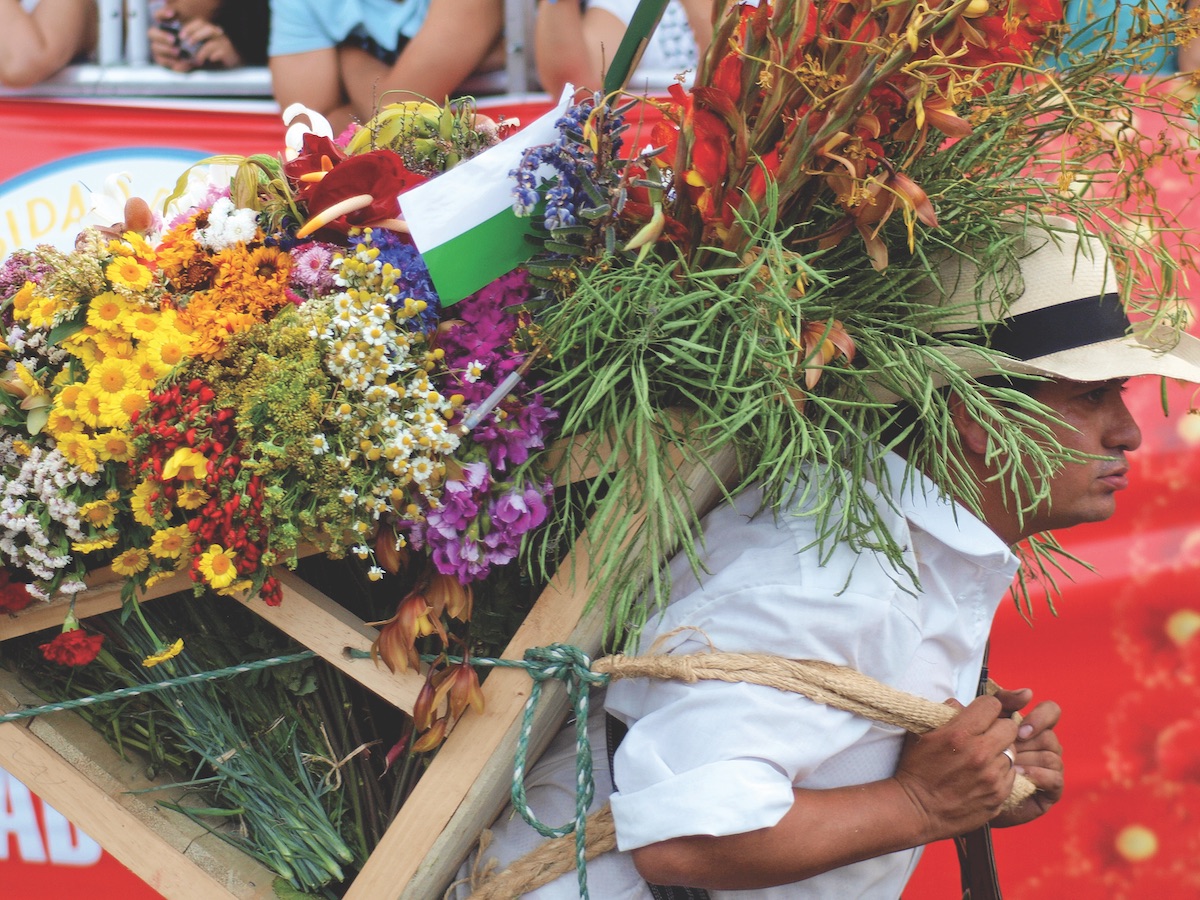 The elaborate arrangements that fill the silletas, which can weigh as much as 170 pounds, are made up of the dozens of flower varieties grown in Antioquia and exported to all parts of the globe. 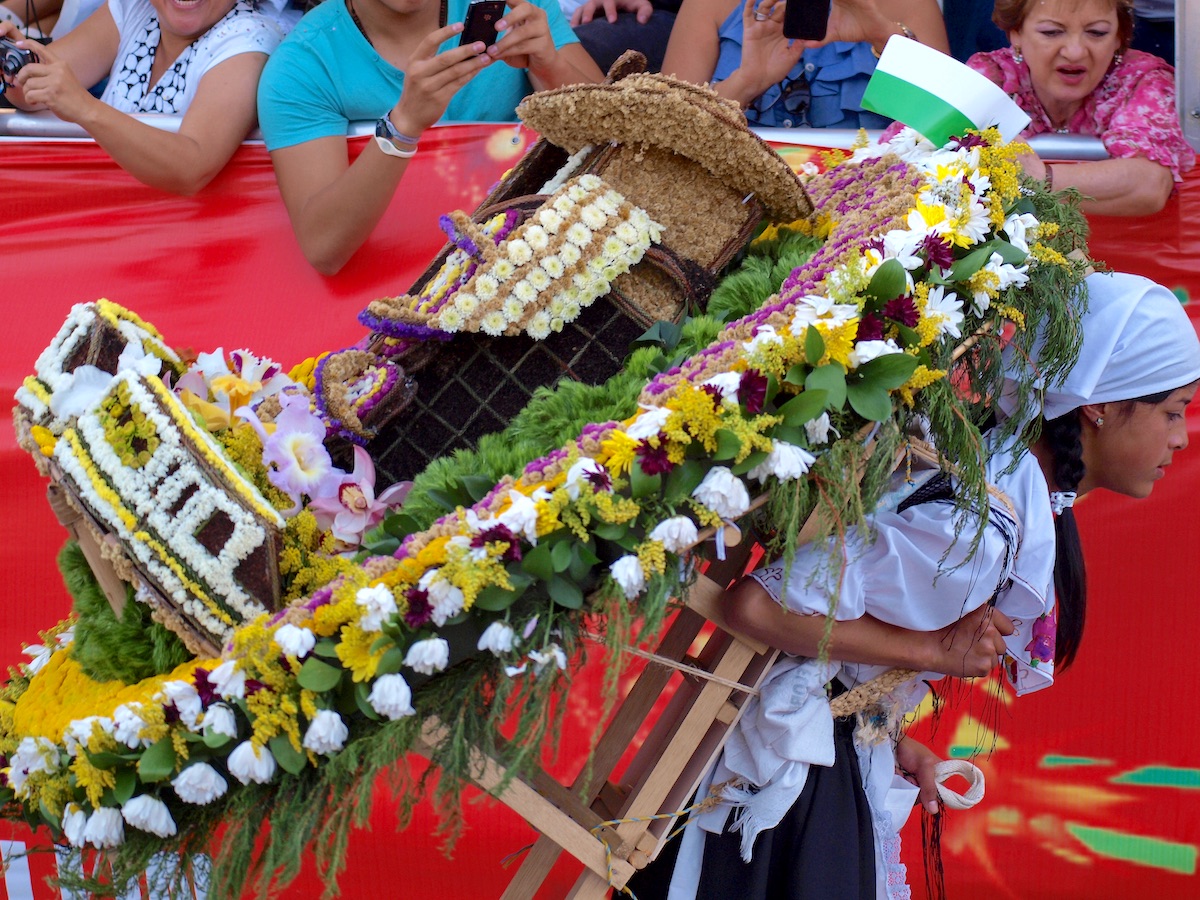 Silletas emblemáticas (emblematic silletas) add a sturdy base to the traditional design. The result is a floral diorama in which vivid scenes and written messages are designed from contrasting blooms and flexible pine buds. 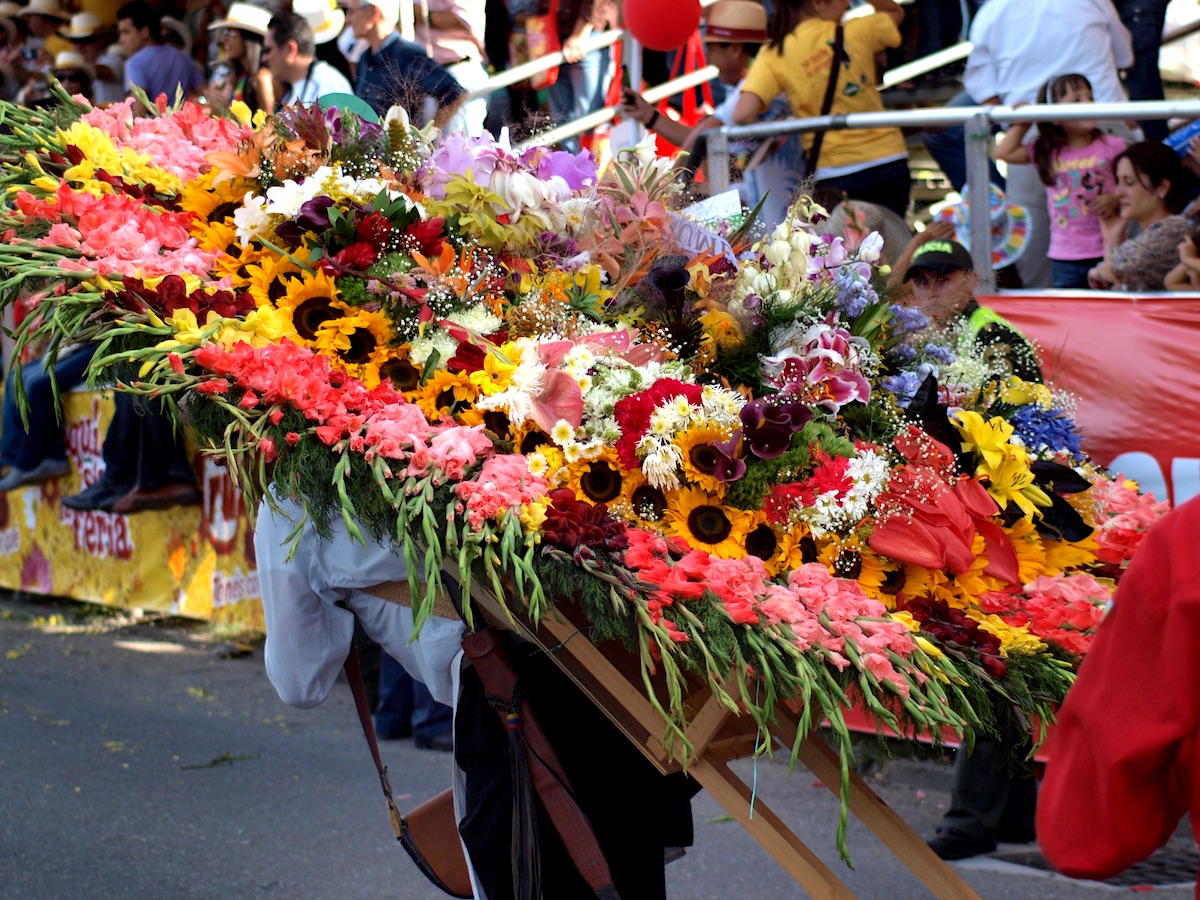 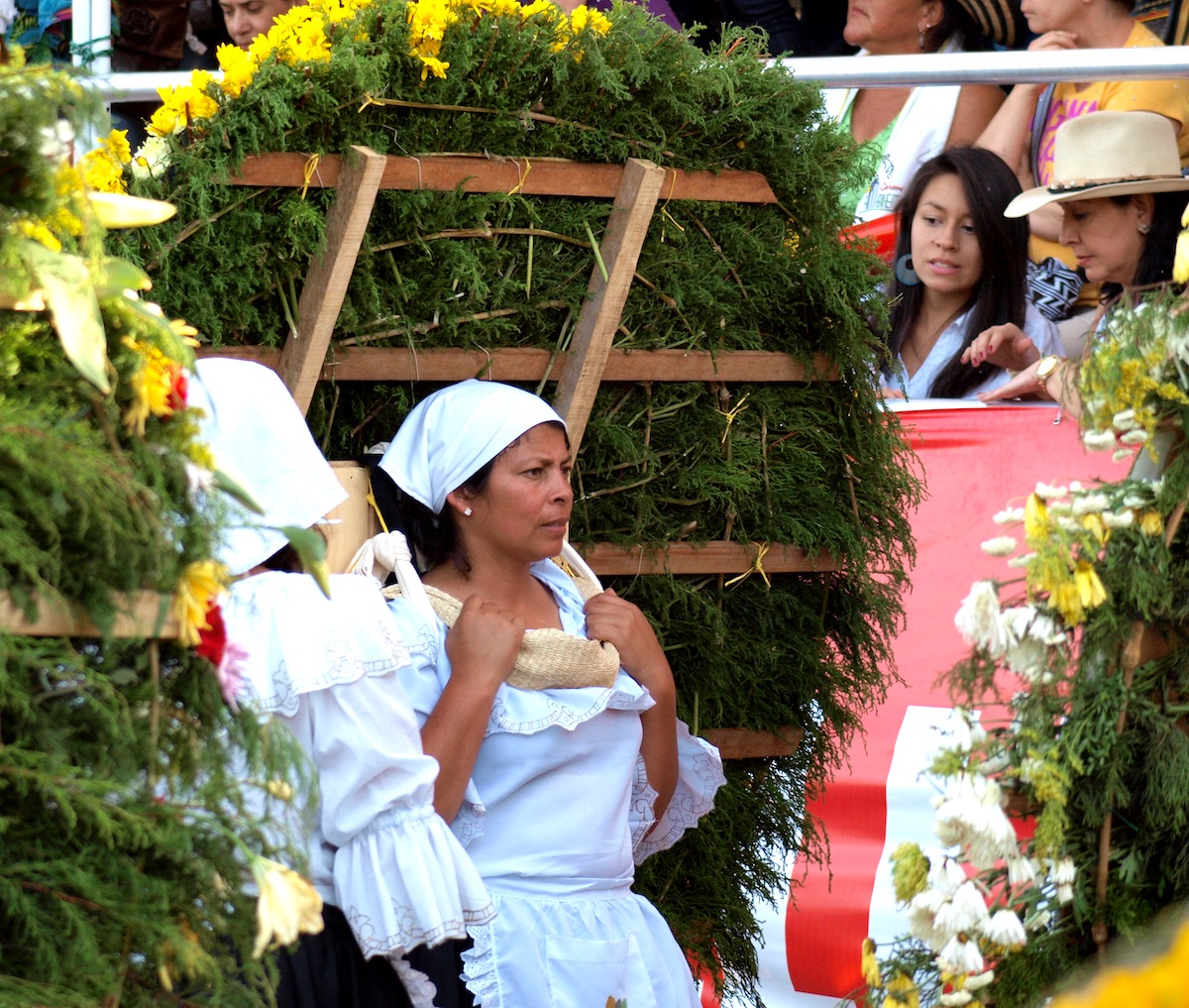 Silleteros are revered in Paisa culture and honored by adoring parade-goers.

Some of the finest flowers in the world come from Antioquia, and the artistry of the silleteros, who spend all year testing and refining their original designs, is legendary in South America. Still, it is the people of the region who make the event so unforgettable. Flowers express nature’s beauty, and the Paisa people, who send their blooms to all parts of the globe, reflect this beauty with an abundance of heart, generosity, and goodwill.

2023 Dates for Festival of the Flowers, Feria de las Flores

The next Feria de Las Flores, Flower Fair, will be from July 28 – August 7, 2023 with the Silleteros Parade taking place on Monday, August 7.

Visit the festival’s official site for updates on specific events and more information.

Written and photographed by Greg Nichols